A new breed for us to own but we never go into buying a dog with out reading the history of the breed and what they are like to live with. So let me share some of our experiences, and also what I have learnt about the breed so far. 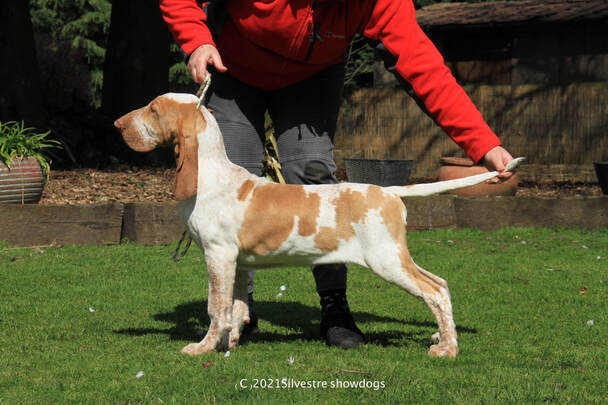 One of the oldest known Gundogs is the Bracco, which came from Italy. Classified in the Hunt point retrieve group. They date back to the 4th or 5th century BC. They are also known as the Italian pointer or Bracco.
The other Italian gundog is called the Spinone and their are only two gundog breeds from Italy.
They have the sweetest nature and excellent with people, cats, and other animals. Their whole existence seems a happy disposition. Very affectionate, and loving family companion. They have a gentle nature, but they have a stubborn streak. You may have to persuade a Bracco to be on the same page as you with treats.  Encouragement is vital, reward training vital and absolutely NO HARSH handling.  They are a noble breed of dog.
The breed is very much about the head and its shape, those divergent plains, many think they are just hounds, but they are not, and they are in fact a gun dog, they use their nose to scent, and the are excellent dogs to flush and retrieve birds.
The dogs height is to withers: Males 58-67 cm and Bitches: 55-62 cm. They weigh approx 25-40 kilos.
You will notice the breed standard allows for bitches to be taller than males.
Their heads are so distinct, and long and narrow. Their eyes should be oval, and coloured either ocre for an orange and white Bracco, if the dog is a chestnut then the eye colour is darker.
They have wonderful long ears, which in length reach the nose. The ears often go in the water bowl and a trail of water all over the house afterwards. Because of the long ears it is advisable to check ears regularly to make sure they do not get an ear infection.
Their are two types of Bracco, because they came from two different regions of Italy. The chestnut and white from one region and the orange and white from another region. The base colour of the dog is white, but you can get white, white and orange, white and orange roan, orange, chestnut, chestnut and white, chestnut roan and chestnut.
The chestnut colour should only be chestnut, a rich colour which is distinctively different from a German short haired pointer, liver colour. The chestnut must also have a metallic sheen to it.
The coat is very short but it is dense, and they can moult and small hairs can get everywhere all over your clothing. A dog breed again which should not be brought if you have allergy’s.
Some people ask if the dog smells as a breed. Although they do not smell as much as a Labrador, they do have odour which can be down to all the folds of skin, a musky smell. Its not a bad idea to clean the face with salt water, or wipe.
Some people think they are hounds, but they are a gundog.
The dog covers the ground quickly with an extended trot, which is down to the long angulation of the bones in the shoulders and strong long thighs, down to powerful hocks.
They have big feet which are oval and short nails.  Ive noticed how quiet our Bracco are when covering the ground unlike a noisy Vizsla.  The Bracco is almost silent, unless my hearing is shot lol.
They are food originated which is helpful in training.
You should defiantly not own this breed of dog as a first breed. Plus you should not own this dog if you can not learn recall from an early age. As they are a breed designed to range ahead, and will cover the ground so quickly they will run off. If you do not have control you can easily loose your dog. This Im led to believe is the one main reason dogs are dumped in rescues, because owners just do not understand what they are taking on. I can see this already as with our dog we taught recall, and she comes brilliantly but they certainly could go off.
The have a stubborn streak and although some say they do not, they do need persuasion to do what you want them to do sometimes. Especially if it means coming away from an interesting scent. But they do like to please you as they are sensitive. You could not have harsh handling of the breed as they would be very scared. They are sensitive. Because they have a wonderful temperament they a pleasure to own.
With being a larger dog it is important not to over exercise the dog too much as a youngster, feeding raw food helps with growing slowly, rather than too quickly which can cause pressure on the joints. Do not let the dog run up and down the stairs or jump off sofas, or high surfaces.
The breed should be hip scored, elbow tested and eye tested. The breed average for hips is 15 although 5-79 is seen. The highest possible score is 106. Elbows are either bred 0:0 or 1:1
The breed like so many other HPR need a good walk every single day. As adults 2-3 times a day is required, depending on distance. Off lead running is important for every HPR breed because they get the chance to scent, smell and their brain has to think. A walk around the block does not suffice. If you are buying the dog as a pet the Kennel club good citizen scheme is brilliant.
They are a breed that likes company, and ideally you should not work full time to own an HPR breed of dog.
Because the breed is rare in the UK finding a puppy quickly may not work, you may have to wait 12-18 months for a puppy, so get on breeders waiting lists as soon as you can do.

History
The bracco is a distinct breed in looks, and in some writings in the 4th and 5th century they are mentioned. Which makes them a very old breed indeed. An elegant dog bred and sought after by aristocracy to hunt birds.

Sought after by aristocracy and used to hunt birds. Sadly after the end of the 19th century and early 20th century the breed nearly became extinct, and if it wasn't for Italian breeder ferdinand decor de ferranbouc they probably would of done, he saved the breed from extinction from reading about the breed. He also created the breed standard for the breed.

The origins are unclear on just what breeds made up the Bracco, but I have read the egyptian hound and mollosus which was a mastiff breed had some part to play in making the breed. You can certainly see the hound look in their heads.

Their are two colours of Bracco which is Orange Roan and liver Roan. Both make such wonderful looking dogs.

The breed first came to the uk in 1988 so a really new breed to the uk. This makes them on the rarer side to find, and not a lot of people know they exist which I found out when I brought my first Bracco. The vet was fascinated and wanted to know more.

The Breed Standard for the Bracco can be seen here.
https://www.thekennelclub.org.uk/services/public/breed/standard.aspx?id=2175

Have a read up as the standard is just a description of the breed and what we as breeders should strive to breed as close to as we can.
Breeder of Hungarian Vizsla, Bracco Italiano and Weimaraner