Dogs we have bred

Our dogs go to various different types of homes. Pet homes are always a priority to us, because we would rather a dog in front of the fireplace, than sitting in a Kennel somewhere. So we select the homes carefully. None are sold for breeding unless pre arranged and the dog has a pet lifestyle.
We have always said that many good dogs lay in in the pet home and you probably have a show dog sitting in front of you now.
We do not charge more money for show dogs, I know some do charge more but we never guarantee dogs but we can sell with potential only.
Here are some dogs which have gone onto do different things to just being pets.
FAMILY

This lovely girl bred by J Savage has been shown at a few shows around the Uk in her two years of life. She qualified for Crufts 2019 and 2020. She has won Best of breed, as well as best puppy in show. She came from a Game of Thrones theme litter, hence why she is called Silvestre Red Woman. 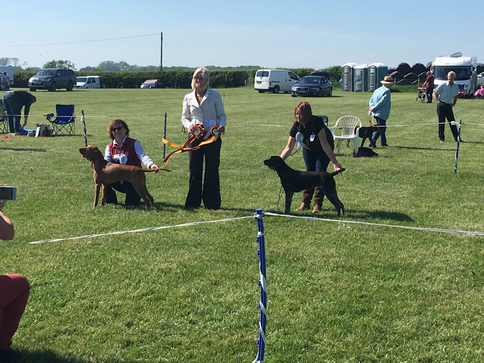 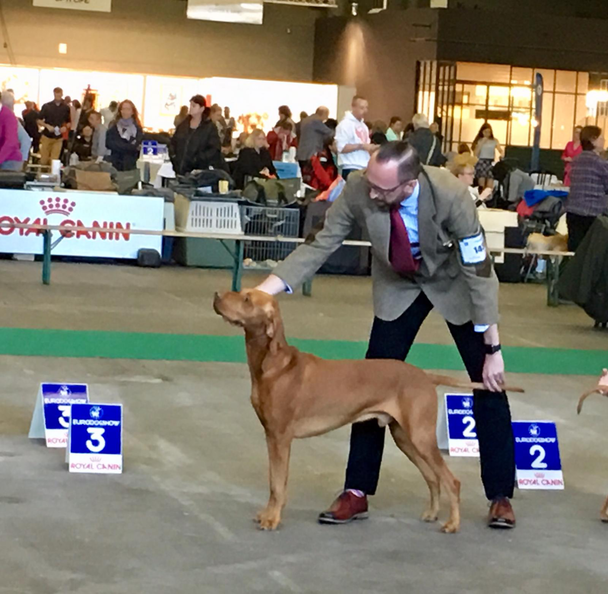 Dexter won his stud book number at Crufts 2016 by winning first place in limit class, and is now qualified for Crufts for life. Instead of chasing places to go to Crufts he is automatically allowed to enter. How wonderful

. He lives with his adoring owners Ian and Graham near Brighton, England.

Spice is a fully trained search and rescue doe. She lives in West Sussex. We are proud of Spice to be the only second vizsla who has trained and passed the tests.

Mrytle is Silvestre's Jolene
Mrytle is a lovely junior girl who is being shown at Open and Championship shows.  She has done very well and qualified for Crufts several times over.  Myrtle has also under gone health tests ready for when she is older as her owner would like her to have some puppies.  She has an excellent hip score, CA clear and she will be having Glaucoma done at a later date.  We look forward to seeing how she gets on in the show ring this year.

Ruger is a show dog.  He has won with his owner Lin 5 RCC and 1 CC.  We are so proud of Ruger and Lin and what they have achieved.  He has won his stud book number and is qualified to enter Crufts dog show for life. He needs 2 more CC's to be a champion.

Delilah is sister to our Cookie.  She lives a dream life and quite remarkably she is a dog that goes beating on gundog shoots.  She is also a show dog and has qualified for Crufts 2018/2019 many times over.  At one point was in the top ten best French Bulldog bitch puppies in the UK.  She qualified for STAG which is an award show where all the top dogs compete.  Getting to this is quite an achievement considering how many French bulldogs are shown in the UK.
​Delilah is now doing scent work.

Captain is a dog who went in the show ring and won many first places.  Also a few best of breeds at open shows.  He was doing exceeding well.  He won a Reserve Challenge certificate giving him his stud book number in 2016 and this was a a special Hungarian Vizsla club show.  The centenary show and a judge from Australia awarded him this award.  We were so thrilled.  Unfortunately though his owner has given up showing and has castrated her boy.  She runs a dog training school and just doesn't have the time to show him now.

Skye is Captains sister.  She lives with Naomi Watkins in Suffolk.  She really enjoys showing her dog and she has achieved many Crufts qualifying places.  I hope that 2018 brings her some more special places.

Ginny went to live with Hilary who first introduced us to Vizsla. Ginny is just a superb girl. She won a first and reserve CC in 2015. She also has her kennel club stud book number. She has gone on to have a couple of litters with Hilary and now a grandson of hers is winning many best puppy's in breed. It really is a pleasure to watch the generations entering the show ring.
Ginny has now won 2 Best Veterans in Breed at championship shows. Also a RCC in 2019.

Buzz is brother to our Cookie.  He has probably the most perfect life of all dogs, he is spoilt rotten.  He has his own instagram account and he is part of a theatre production team, also he goes to companion dog shows.

Pepper is currently having a break from agility but I have included her in this page as we have been so proud of what she has achieved. She is like a Ginger rocket.  Here are a couple of photos of her owner and Pepper on action.

INT.CH & DUTCH & LUX.CH. Silvestre Last Tango with Silberliss JW - Evie
Evie is shown in the UK and Europe, and has won multiple first places, and group wins in Europe. She has her UK stud book number and can enter Crufts dog show for life. She is going to more shows in Europe to claim more titles if she can. We look forward to hearing about her progress.

Dogs who have passed away but achieved great things.

Lorn was the foundation Vizsla for Carnlochan Vizsla.  She died unexpectedly in 2017 from poisoning.  Lorn had been to Crufts dog show many times, and she had won good places at open shows, best of breed.  Her last win was Best Veteran in show at an Open show. Her photo is her winning.

CH.Silvestre Romulus - Robin
Robin went to live in the Czech republic as a baby and he grew up and won field trials, he did blood tracking, he was a show dog and became a champion.  His owner was so dedicated to Robin and he had the most wonderful life.  Unfortunately Robin passed away after an interception of the bowel.  He was one in a million dogs to own.
Dogs sired by our stud dogs: