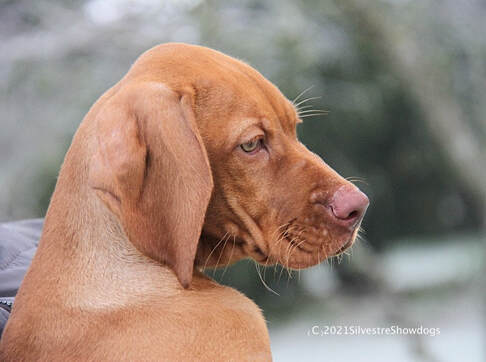 Sire: Silvestre Fortune N'Glory
Dam: Silvestre Colour Me Orange
Silvestre Blame Destiny is a name I have chosen from the Witcher Neflick series. It was a song from the Witcher.  Im very much a fantasy or sci fi film lover.  This girl was special as the only girl in the litter.  Lane is the result of a silent but split season from her mother and a surprise mating happened, but lucky for me I saw the whole thing at a distance.  By the time I reached them they were tied only for a few mins then that was it.  I didn't think it would of resulted in puppies.    So what is a split season? A bitch comes into season, out of season then a couple of weeks or 4 weeks later comes in again.   A silent season is where the bitch doesn't bleed.  So no visual signs of a season.  It wasn't until week 8 of the pregnancy that the penny dropped that milk was coming in. As the mum had no signs of pregnancy.  A scan revealed possibly just 2 pups.  Lucky for me their was 2 pups, and her brother went to someone who had been waiting for an indie son.  In fact if she had of had 2 girls both would of stayed with us.  I will never say I know everything their is to know about breeding as I have learnt something will happen that totally defies logic or reason.  Breeding dogs is something I still marvel at nature and what it does.  My friend who I told what happened said "Rachel you should write a book on breeding"!  Only because we see so many different scenarios. Breeding is fascinating but I am fully aware that with nature you can be dealt a blow from time to time. Ive seen my friends all loose their bitches during labour, and we should never get complacent that all will go right all the time.  I had a split season years ago with a Weimaraner, and I had a silent season years ago with a Weimaraner.  So ive seen it before but you kind of forget it can happen as your not thinking about it.
We called her Lane, and my son calls her Lois Lane from the Superman comics. I like unusual names if no-one has noticed ha ha, so I like something that not a million other people have named their dogs.

Her pedigree name is a song from the witcher, but I felt apt.  Blame Destiny because in fact it was Destiny that she was deemed to come into this world, and destiny for me to keep her.  I am in love with her, she is in fact the easiest puppy we have kept in years.  She was fully house trained at 8 weeks, and even I pinch myself. She never runs off, she stays in the yard at all times, then comes in the crate and never cries.
With Covid its hard in the area as no training classes are going, but we are training her at home, and walking her out to show her new experiences.
She will be vaccinated at 16 weeks for core vaccines, then rabies vaccine to be done at a later time.
Her mum is absolutely retired, and will be spayed as soon as we can do it in 2021. She had very few puppies in her time but the quality was always there.  A bloodline dear to my heart as her grandmother was my foundation bitch Scarlett. Lane is now 4th generation of our foundation bloodline.